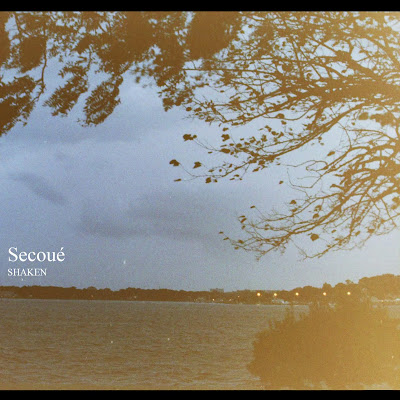 "Shaken" is a single from Secoué. This one song is enough to get me curious as to what else this formerly solo project. Mixing familiar screamo elements with some some interesting almost shoegazey components. Secoué  is definitely worth keeping an eye out for. 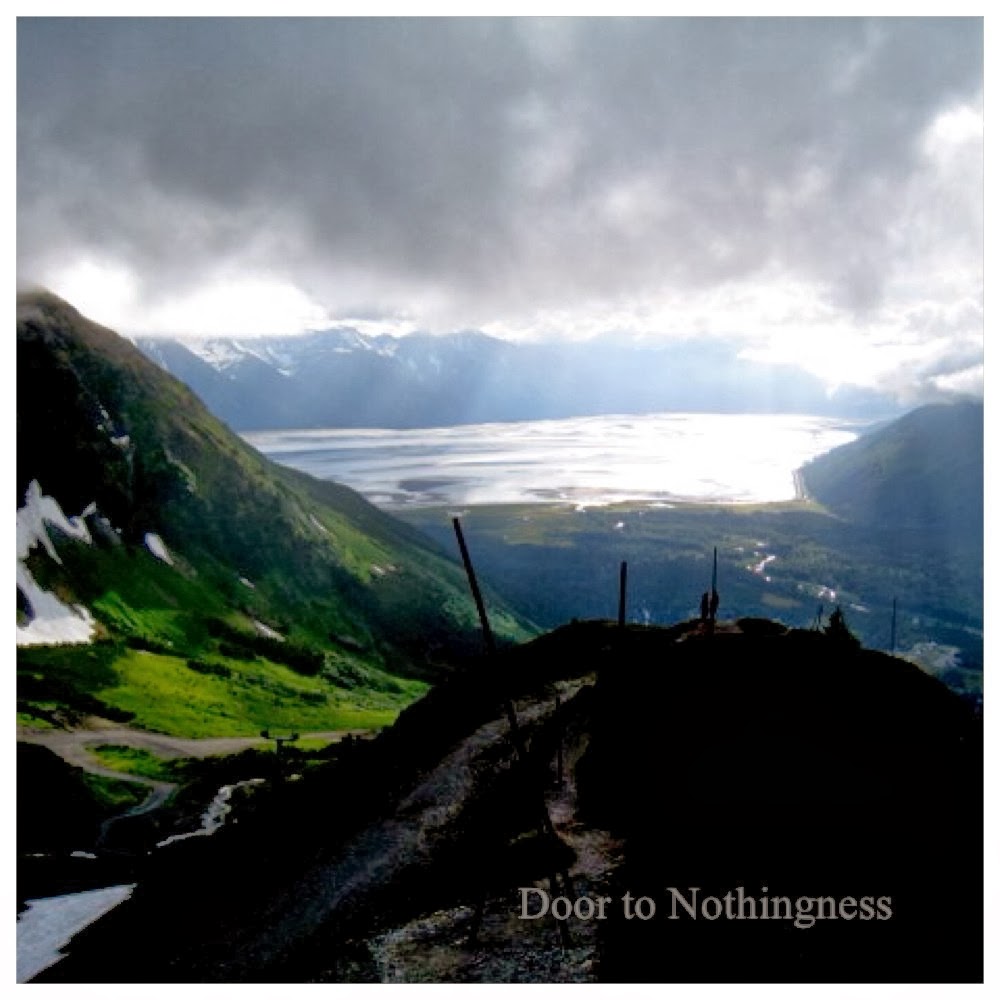 if you are in the mood to sit in a chair and stare at the rain splashing on the window sill then "Door to Nothingness"  is the perfect soundtrack for you. Even thou this is coming out of San Diego, it sounds like it is brewing in cottage deep in a cabin in the middle of nowhere. a beautifully empty yet full sound accomodate a eerie guitar that form a beautiful ambient yet unsettling atmosphere. If you are fan of DSBM, ambient, folk, or are just currently reflecting in your room listen to "Door To Nothingness".

Posted by RottenYoungEarth at 3:06 PM No comments: 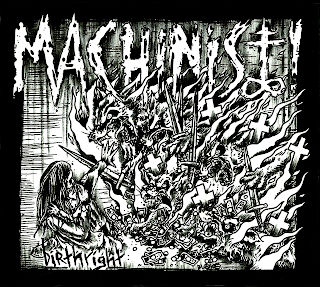 Machinist! have released a new EP and it is chock full of aggression, conscious lyrics, and of course very fast. Machinist! is a band from Georgia, they released an EP last year called Black List! it was one of my favorite EP's that was submitted to me that year. This time around though Machinist! is coming out balls to the wall and holding nothing back. Much more anger, more crunchy guitars, more slamming drums, and of course their politically conscious lyrics. As this album has started with the song Birthright their vocalist Jeff Hill is already throwing out lyrics like Tear down the monuments / founding fathers were frauds /
stolen flesh and continents / preaching progress as cause. The hectic feel of this album lets down absolutely none on the next track They; this track is just a flood of noise filled riffs and Jeff Hill once again firing out the lyrics They want you to believe / They want you on your knees back to back. Then ending the song with him going into a deranged ending with him repeating Obey / They. Hood is my favorite track on this EP, it begins already thrashing with Jeff barking out hate filled lyrics, the energy of this song is just very live sounding. The part near the end where the lyrics change to keep fucking / keep drinking / stop thinking / you are your enemy /, backed up with a powerful drum part and a very evil sounding guitar riff. That part is just such a good ending to this song. They wind down this album with the song Success Built On Self Hate which happens to be the longest on the album (the album is under like 6 minutes) its ends the album in the right way it should, slower, angrier, and sure as hell getting their point across with the lyrics / you're not a saint, savior, martyr, or prophet / so eat your words and pray in your closet / the tide is turning, you can't hope to stop it /
your stain will be washed away and forgotten /. This is a band you want to see live, I imagine the energy they put out on the stage is fucking awesome. Hope to see these dudes live sometime. Very solid album, check it out on November 29th on Speedowax Records.

Posted by RottenYoungEarth at 4:32 PM No comments: 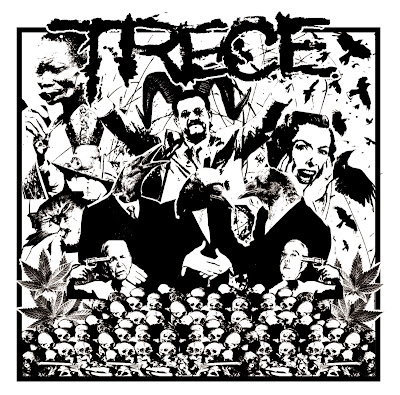 "Cuervos" by Trece is around 4 minutes long.. and that is all you need. Trece delivers fast driving sound that will receive a warm embrace from any fan of the hardcore or crust genre. But Trece also delivers more slowed down sections to add character with a hint of thrash metal influence. Trece will feel familiar and should be a easy choice for any fan of punk/hardcore/ crust.

Posted by RottenYoungEarth at 3:00 PM No comments:

Bear Creek - Listen To This With Your Eyes Closed/ Lutitia 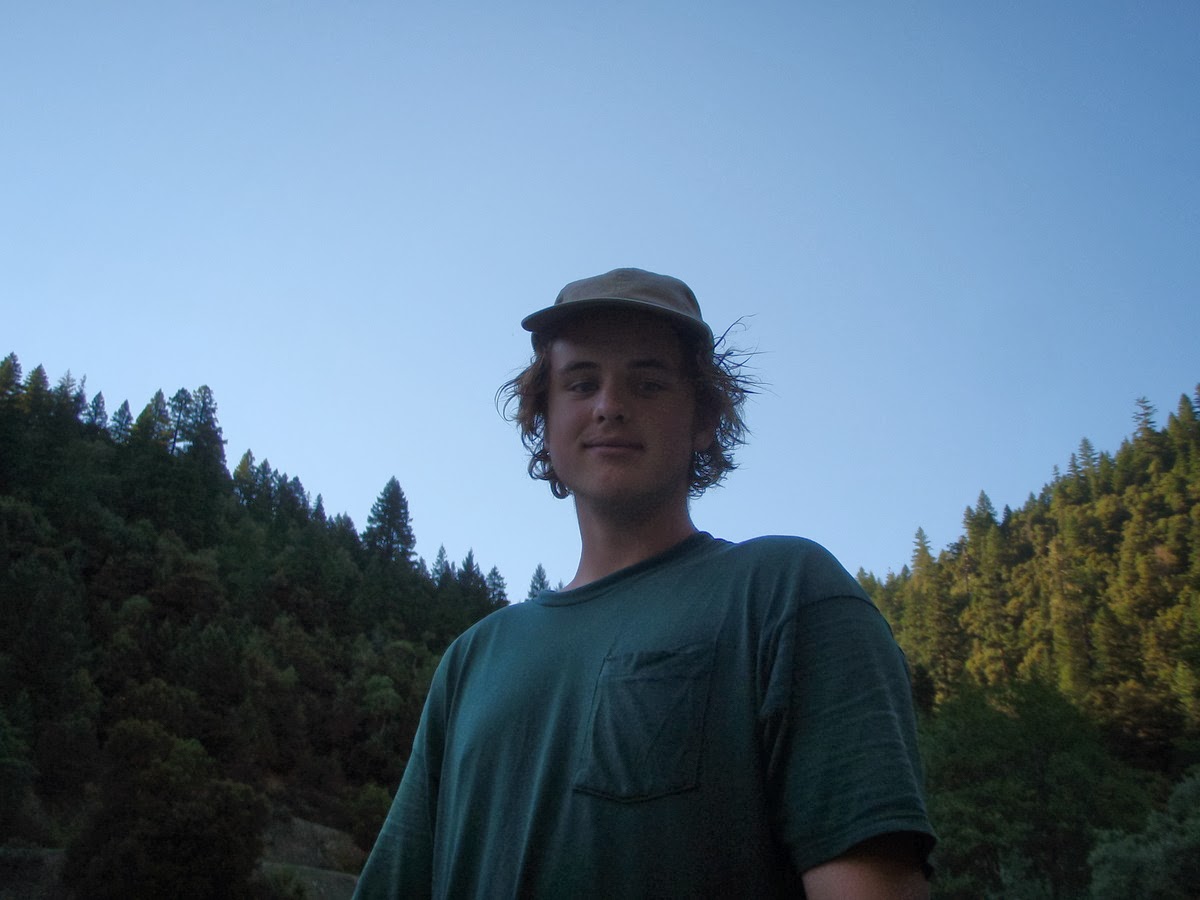 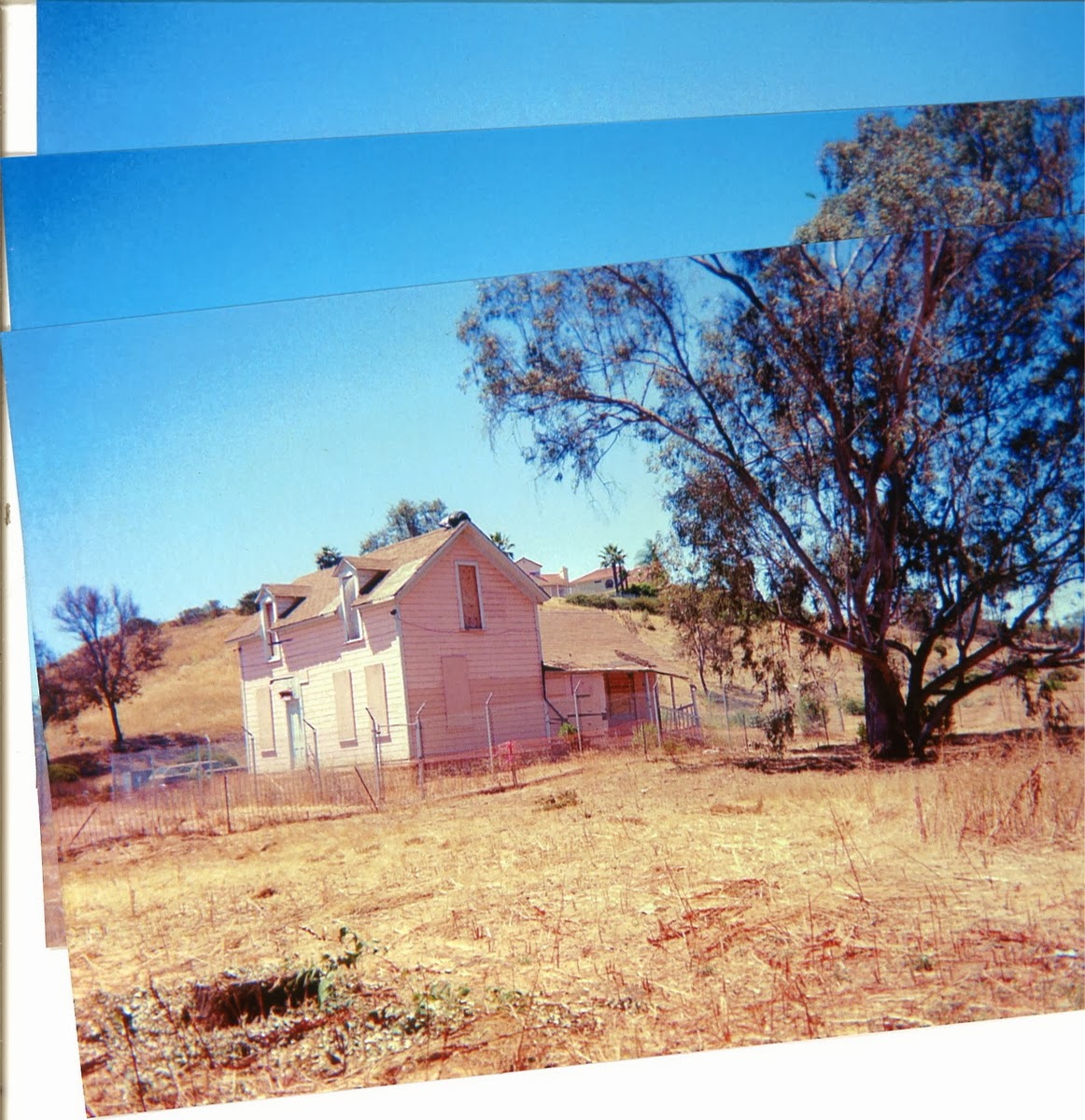 Listen To This with your Eyes closed:
1. Yelling At Mirrors
2. X's For Eyes
3. Perfect Neighborhood
4. Migraines and Renee

Alright this is a double review.. well kinda two albums by the same guy. Alright this is Bear Creek , It is the solo project of Erik Jensen and I left speechless. But i have to write a review so i will try and formulate words. I chose to do two albums because Bear Creek covers two different yet familiar sounds in each album that need to be noted. First off is "Listen To This With With You Eyes Closed" this album is mainly acoustic with slight "fuzzy" additions in the background. This album starts out with one of the saddest songs i have every heard, "Yelling at Mirrors" Literally takes my breath away. Combining a slow sad guitar riff with harmonix adding atmosphere and some amazing use of doubled vocals create a song that immediately stops my heart and takes my full attention. this album goes plays through as nice stroll through a park in the rain, "Perfect Neighborhood" takes a more upbeat turn reminiscent of the Moldy Peaches and then the album comes to  close with the dreamy  "Migraines and Renee".

Lutitia takes a different turn with the addition of electric instruments, drums, and a more full sound. The First track "Her Ghost Staring Me In The Face" starts off as a melodic treat before turning into a crescendo with full drums and a perfect transformation.This album gets progressively weirder as if you are walking deeper into  cavern with bright crystals everywhere. Going from the instrumental almost 8-bit "Paint Composer" to fuzzy crunchy organized chaos that is "Velvet Naptime" and coming to and end with an almost psychedelic note on "Fuck Yr Friends". These two albums are amazing adventures through an amazing mind, I highly recommend both of them as well as his other albums. 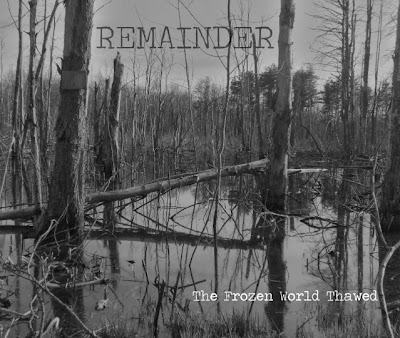 Tracklist:
1. That Which Was Left Beating
2. Still Restless, Still tired
3. The Slow Breaking Of Morning
4. Balcony Scene
5. The Frozen World Thawed
6. I Exist In Pre-Dawned World
7. Barren Trees
8. Forgetful Eyes
9. Clear the Earth/My Exit To Hide In
10. Rust In My Lungs

Remainder is a Screamo band from Boston. Now that that is out of the way The Frozen World Thawed Is a Solid release for anyone who is a fan of the genre. This album contains everything you could want, from melodic haunting riffs to more chaotic driving songs all accompanied by harsh strained vocals that compliment it all. This release begins with a  melodic (somewhat creepy) riff that quickly escalates in a full movement that sends a chill down you spine. The album is a rollercoaster of slower haunting songs to engaging explosions of emotion, all coming to a close  with an almost 14 min perfectly appropriate send off that i won't ruin. Remainder successfully delivers a amazing album that caters to almost any fan of the genre, I highly recommend you listen to this album start to finish. ~

I Was Afraid - No Love 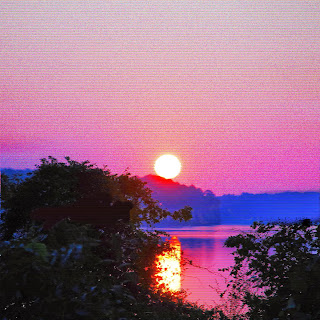 I Was Afraid are a band from Arkansas, and I have posted some of their releases before and in the reviews I was always saying that how I really liked the release and stuff, but this time around I Was Afraid has blown my expectations out of the water and made quite a fucking awesome album. This is one of those albums you can put on repeat and just close your eyes and zone out and just kind of feel the music and the way that it conveys its full emotion.  They play a very grunge like version of Emo on this record, which I really like because i'm a sucker for all those bands like Hum or a newer band Daylight's new album Jar. But honestly I am kind of feeling No Love a lot more, I like its personal lyrics more and I feel as if these dudes can just chock out some of the grungiest but at the same time some of the prettiest riffs. Killer drumming, you can't help but just nod your head with how these songs go. Cathartic filled vocals and lyrics, another just perfect addition to this album. My favorite song on this thing is either Sway or No Love. I blasted through this CD so fast just because I've been loving it so much. You guys should probably check this shit out, or else you're missing out. Might be my favorite submission of 2013. Thank you to all the dudes in the band for making such a great album and letting me review it. -Jacob Rice
Posted by RottenYoungEarth at 9:05 AM No comments:

Email ThisBlogThis!Share to TwitterShare to FacebookShare to Pinterest
Labels: Emo, I Was Afraid, Punk

Arkham are a Hardcore band from Chicago Illinois. This is their new song Old Money, and to me I feel like they have progressed their sound to a much more fluid, and emotional driven sound. Much more anger, and much more feeling. This song is chock full of melodic guitar riffs, pounding drums, and just the right vocals. They have been going since about late 2010 and filling the band out in early 2011. Since then they have release a good amount of very solid songs that you can check out on their bandcamp and download for free! Arkham is planning to release a few more singles this year and in early 2014 releasing an EP! I am excited to hear how great it is after hearing this song. Definitely check these dudes out, they are doing some cool shit. -Jacob Rice

Facebook
Bandcamp
Tumblr
Posted by RottenYoungEarth at 10:01 PM No comments: