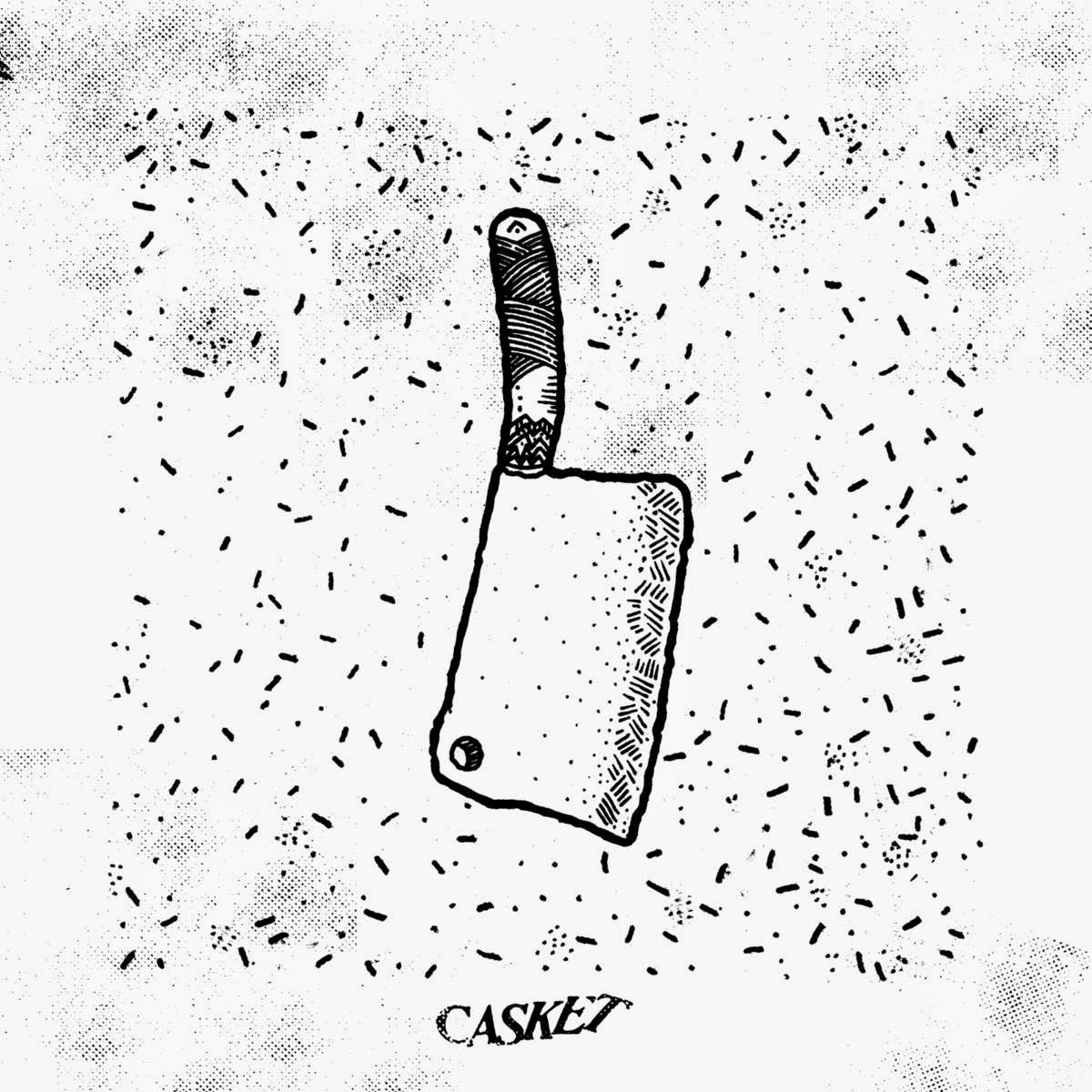 Casket is hard to describe, in a modern age filled with twinkly emo they bring a familiar but different sound to the genre. But staying a tad bit more simple than most opting for less noodles and more power. The Vocalist is slightly monotone at time but it works and makes the occasional screams much more abrasive and sweet. All together this is a great album and worth the curiosity. 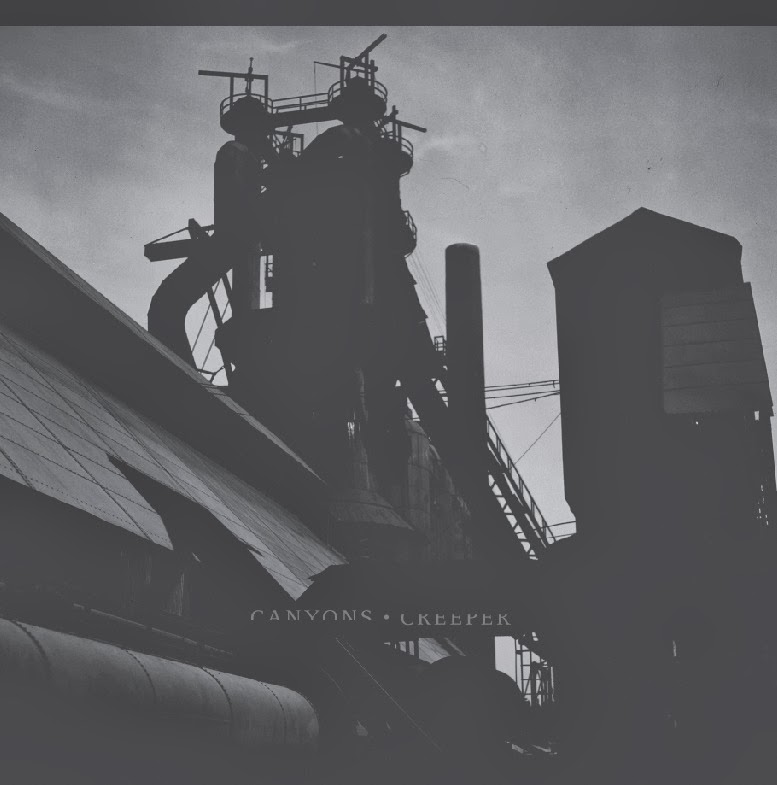 Canyons/Creeper Split is a 11 song split, both bands play a dark style hardcore. Mixing hardcore elements with dark atmosphere and strained vocals both bands deliver that sound for those wanting more than your typical punk band. Both bands sound very similar which is a little bit disappointing because it was hard to tell one band from the other, but other than that this is a good release and worth giving a shot.

Posted by RottenYoungEarth at 12:16 PM No comments: 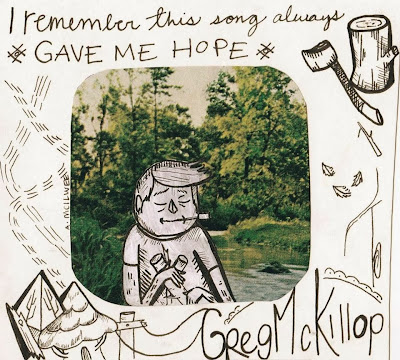 tracklist:
1. My New Friend Pat
2. Make Sure You Sing Along To The Right info Parts Of This Song
3. Satellite
4. This Is What Self Defense Looks Like
5. Armadillos

"This Song Always Gave Me Hope" is a  acoustic folky album by Gregory Mckillop. There are 5 tracks full of catchy melodies and sad vocals. This is all around good and fun album, Its another one of those album that is pretty self explanatory and you should just listen to it. 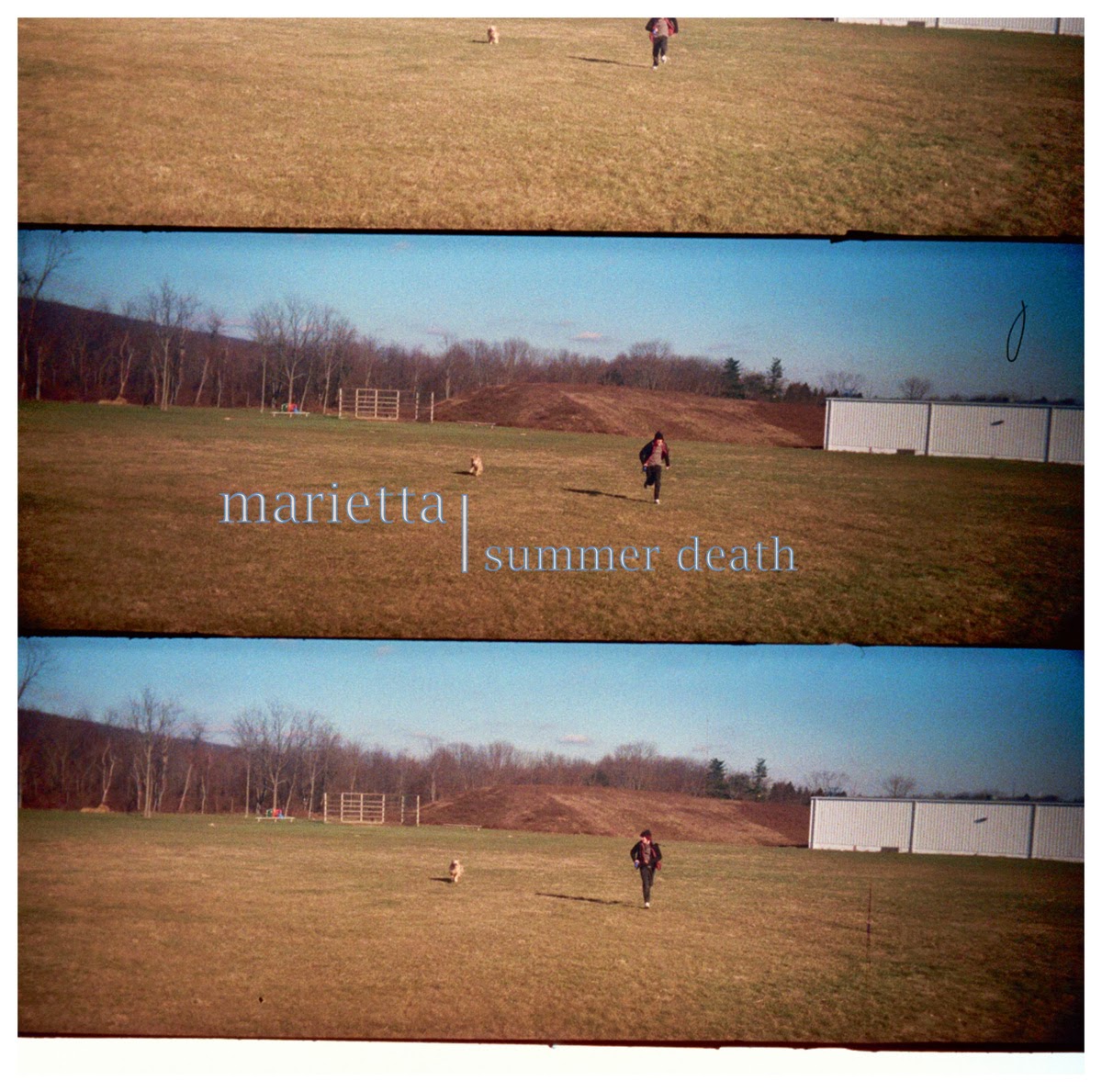 By now you have for sure heard about the emo revival... I am not here to argue about that, I am here to tell you about "Summer Death" by Marietta. This album is beyond good. This 8 song package of twinkly emo delight is refreshing, entertaining and just fucking amazing. Each song keeps its own sound but fits together so well in the album. Clean vocals compliment the twinkly guitar and help carry this albums atmosphere through. I don't really know what else to write, just listen to the album... it is pretty self explanatory and you won't be disappointed. If you are a fan of algernon cadwallader, American Football, or any twinkly emo band listen to "Summer Death". 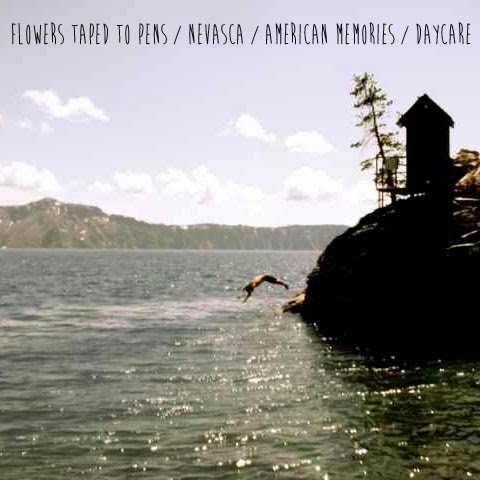 Alright to start this off i had my friend Alex write up Flowers Taped To Pens' side because i am in that band and it would be weird if i wrote it myself:

"Hailing from San Diego, Flowers pulls a lot of influence from a couple notable bands. Their main influence seems to be Merchant Ships/Midwest Pen Pals, in which they perfectly mix light noodling guitars with raucous screaming vocals. Though Flowers and Merchant Ships are similar, Flowers incorporates a slight amount of post-rock, giving off the impression that they are a more dreamy, spacier Merchant Ships. Also akin to Merchant Ships and Midwest Pen Pals is the clear singing that goes along with the screaming, adding an even bigger abundance of emotion to the band. Another one of their influences is probably (like most emo bands) American Football. The use of trumpet in their first song, Ghosts In My Bed, is soothing and is noticeably comparable to The Summer Ends on American Footballs self titled album. If you’re into the emo/twinkly revival scene that’s popping up, give Flowers Taped to Pens a listen. And if you’re not into the twinkly emo scene, give them a listen anyway, they’re super nice dudes." - Alex

Nevasca's side of the split starts off with " Leaving (This Northern) Town" driven by upbeat riffs and clean singing vocals, you can't help but bob your head along. Scream-y vocals are put towards the end for emphasis and work perfectly. The second and last song on their side is "(My) Memory (always) Fails Me" Which starts out with a riff reminiscent of Mineral. this song goes through a slow evolution that keeps you comfortable through the song. Nevasca definitly brings more of a 90's emo feel to their side of he split and it is greatly appreciated.

Now American Memories only have one song, but it's really all they need. AM brings a more raw straightforward screamo sound, and thats not a bad thing at all. "Grave" has a more unpolished sound in the quality of recording but it works really well and i wouldn't want it other way.

DayCare is the last on the split and has one song as well. They bring out a little bit more of the twinkly emo vibe. With a clean twangy driving the song. Everything is solid the screams are strained, the guitar is twangy, and there is group vocals... what more could you want?

I was so happy to work with all these amazing bands on this split and i hope you enjoy it.

p.s the split is available on tape through Ozona Records here

- Conner and Alex
Posted by RottenYoungEarth at 2:48 PM 1 comment: 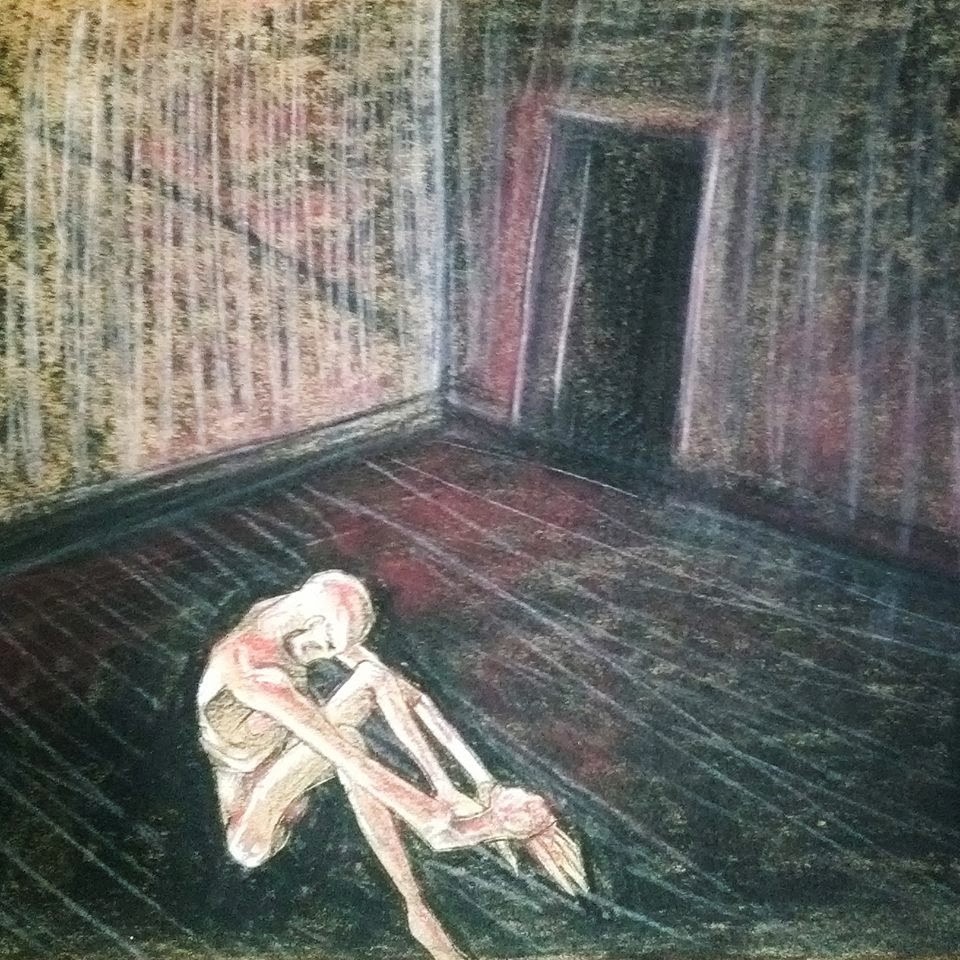 Nayru is a screamo band from San Diego... and if you have not heard them you are missing out. Rising from the ashes of their last band Malon, Nayru hits you like a fist of anger and sadness. The screams are shrill and high pitched, the riffs are driving, and the emotion is raw. Recollections starts off right away with "Memories" which comes at you harshly before a nice melodic lull that gives you just enough time to breath before shoving you back in. It continues on switching between some emo-violence-y songs along side some more twinkly ones. One stand out track would be "Ghost Dance" with a haunting riff that slowly unfolds into a explosive climax before returning to that haunting riff you have come to love at that point. Recollections comes to a close with a treat for anyone who has been following the members through their musical history ;) Recollections by Nayru is a amazing album start to finish, So go listen to it. 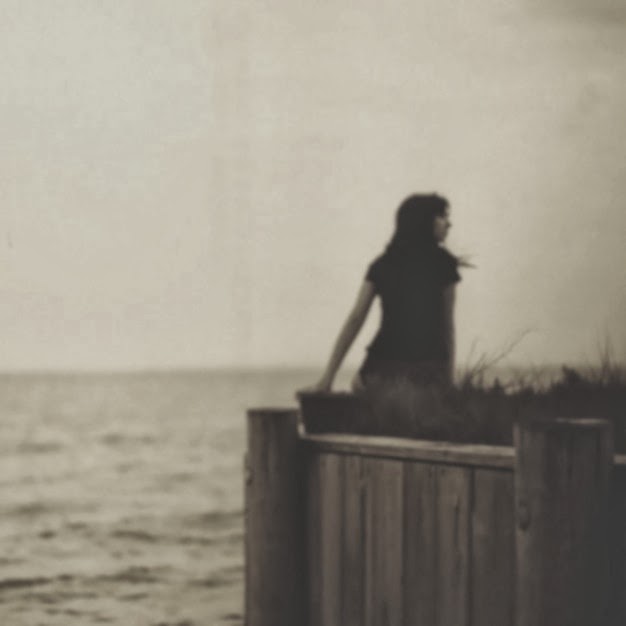 i was drawn in by this EP immediately, "Elsa" by Cedar Falls is a amazing journey through a dark reverbed out world full of atmosphere and looming darkness. With some tracks such as " The Last Time I Saw Elsa" and " Memorybook" displaying beautiful ambient atmosphere, and " There" and "Isolated Road" applying a more fuzzy familiar sound accompanied by dreamy vocals. This Ep is amazing and I am in Love, I can't wait to hear future releases.

Have It All - Changes 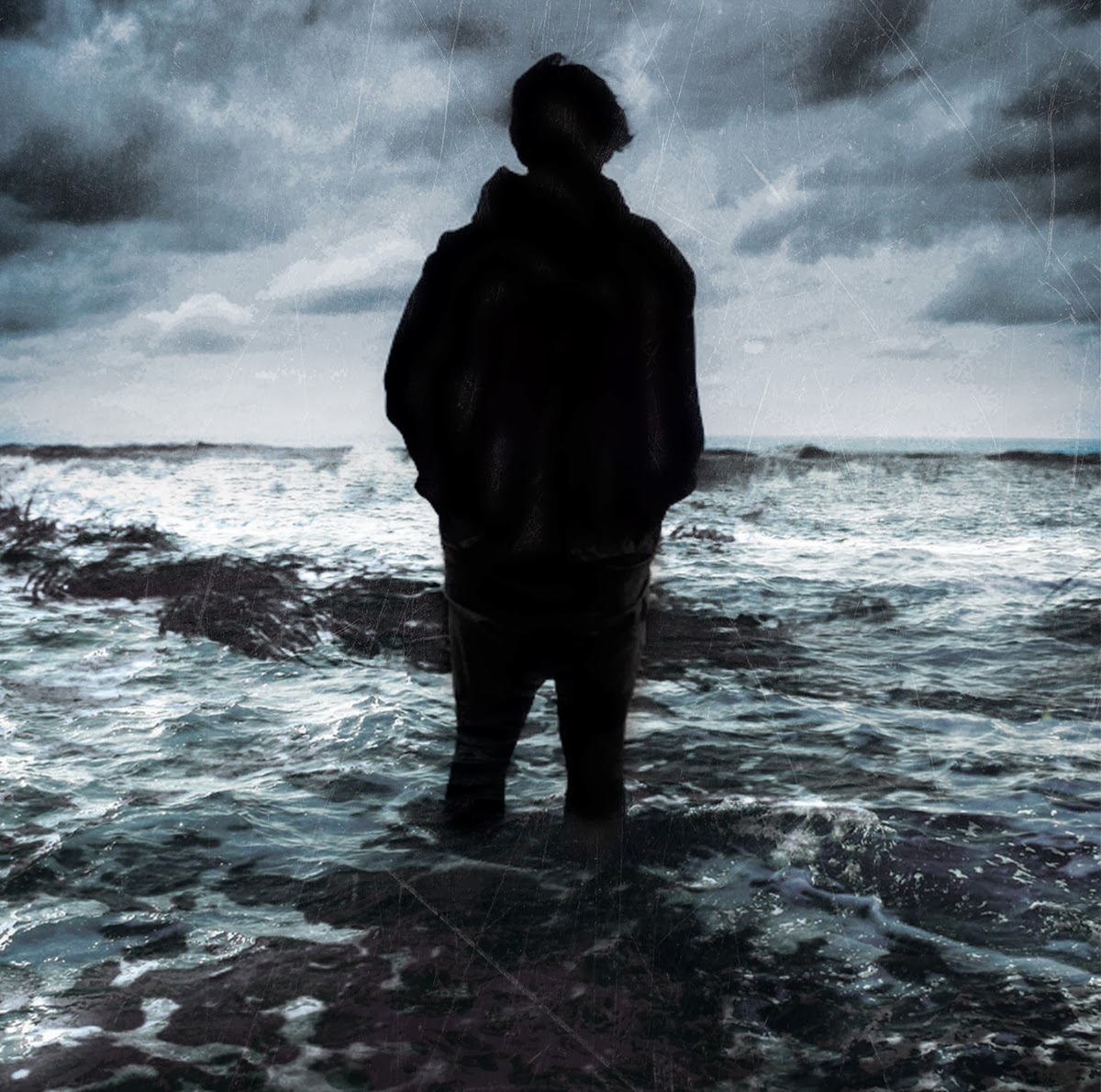 Have It All is a post-hardcore band from Italy. Their newest EP "Changes" combines fimiliar hardcore elements with semi-melodic atmosphere and guitar, the vocals are more on the side of scream-y then the yell-y of Hardcore (if that makes sense). The album hits most of the notes wanted in a hardcore album with faster sections as well as slowed dow, althou i was not a fan of the "breakdown" sections in certain but to each his own. I give this band respect for their DIY recording. In the end "Changes" is a solid release, it doesn't re-invent the genre or anything, but a good release for fans of the sound.

Posted by RottenYoungEarth at 12:26 PM No comments: