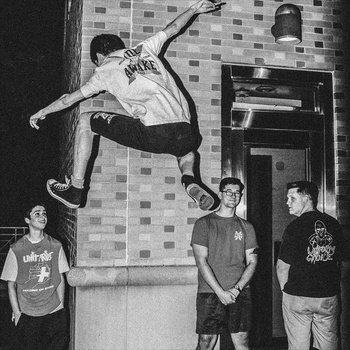 Last year as I stood outside the tiny Brooklyn venue "Saint Vitus" waiting for the intimate one-off JUDGE reunion show to begin my eyes were drawn to a young spirit standing lean and uncomfortable in front of the venue. I went and introduced myself to the kid. He had taken a bus all the way from Connecticut to NYC only to find out the show was 21+ and his ticket would not be recognized at the door. Luckily the legendary PORCELL came to the rescue and got Jack in to the show. This bold move marked my first encounter with JACK DAUT. My second encounter happened this summer. Our van broke down on tour in upstate NY.  We ended up stranded in a town called Poughkeepsie and stayed with the lovable Max Garnot and his crew of goons, one of which ended up being Jack Daut. After 5 days of fun and games (literally) with the Poughkeepsie crew, Max, Jack, and the others had earned permanent places in my heart. Just a few weeks later I come to find out that Jack is now singing for a band called "BURST OF RAGE" and are opening the Boston Edge Day show. I had many questions, and now you all have many answers......

1. I hung out with you just 2 months ago and you were not in a band, now you are!? How did this happen? Tell us tales of BOR's genesis
BURST OF RAGE is the result of one weekend in the vast Pennsylvania wilderness. Sometime around mid April, Stick Together had a record release show for their LP. I was fortunate enough to stay at Ned Russins house after the show with some other cool people. In the morning I asked Ned to see his basement. Low and behold I had found his drumset and asked Austin Stemper to play Backfire. He did and I grabbed a cheese grater and starting singing and going off as if we were doing it live. Few more covers went by and Ned joined us on guitar and Dan Horres, on bass. Crucial John (CJ) convinced us to do a cover after their GIVE set that night since GIVE was playing with Rival Mob in Asbury, NJ. Rival Mob dropped and we did the cover after the GIVE set. We all went off including Nick Hinsch who was playing an uplugged guitar and going crazy. 5 months later me and him are doing it still with him servicing the bass duties and me staying put on the mic.

2. Also within that 2 month period BOR was able to play the highly coveted Boston Edge Day show. Tell us how this came about!
I had known about the Boston 15th Anniversary Edge Day since February and we were actually supposed to play Saturday's show but due to time restrictions and other blockades, we ended up playing a very sick show the day before in a VERY ill spot at New Bedford. That show was awesome as that was my first ever performance in a band, EVER. Austin Stemper and Pat Flynn were practicing for the show the next day a few streets down from the venue and they said since they didn't get to see us play they would donate 5 minutes of their set time to us so we can rock the funky stadium for the nice people. So we ended up playing two first shows, one on 10/17/14 and one on 10/18/14.

3. I understand some members of BOR are in other bands, what are they?
Nick YOUTHxCORE / Funk - plays guitar in Nuclear Age and sings in Stand Off. Primal Connor / Crunch - plays guitar in Primal League and some other band from Texas that sounds badass. Double G (MMM) / Skins - rocks the drums for Stand Clear too.

4. Other than skating, what are you singing about?
The vast majority of the lyrics I write are a manifestation and culmination of instances that have happened in the distant past that for some reason always come back to haunt me. I write about emotions and try to put my own twist on it. A song on the sampler has lyrics that my dad wrote and I found them in a secret journal in his room. Lightning Struck is about being confused and being angry at myself. I write what I feel and I like using metaphors.

5. This demo sounds like it was recorded in 1988. I love how it sounds, tell us about the writing/recording process!
We recorded that demo September 27th, 2014 at a cool Maryland kid's house named Nathaniel Salfi. We set up about 2-3 mics and recorded it track by track. I really hate the quality of it, but I'm really grateful we have something out that at least people can get a sense of what we are about. I think there is a lot of honor in urgency and rushing to get things out. I lost my voice a few hours we recorded and thats why it sounds so harsh. I always lose my voice......

6. It looks like the members of BOR are scattered all over. Who is from where and where is the band officially located?
I live in Connecticut, Connor is in Boston cause he goes to school there but he lives in Texas. GG and YOUTHxCORE live in Maryland a few minutes from each other. I say we are from Connecticut and DC because those two locations have an extensive history. Especially when concerning the bands we live. It's tight. I'm gonna move to DC soon.

7. What is next for the band?
What's next is in 4 days I go to wedding, then I come back and book a trip to DC so we can write and practice more. We're looking to release an extensive tape with at least 8 songs. Each clocking at no less than 90 seconds. I'm hoping to record it before Thanksgiving so we can have it before Xmas. There is power in urgency. Next up is playing more shows and spreading the good words.

8. You are quite the connoisseur of the core. How did you get into hardcore, and at what point did you realize this was gonna be a major interest? What is it about hardcore that attracts you? The message the energy? What bands are pulling your heart into it?
I didn't really get super stoked on hardcore until late 2011, early 2012. Before that I had heard Bad Brains and I liked a lot of older heavy metal and stuff like Motorhead and Black Sabbath but I had never heard of anything Straight Edge Hardcore. I was doing bad things and focusing on negative impulses rather than cherishing every day as if it was my last. I was listening to, and still am listening to, a lot of Impulse! Records 1960s jazz, 90s rap, turntablism. I started listening to hardcore extensively when I stopped getting high, which was January 1st of 2012. I knew it would be a large piece of my heart when I heard JUDGE. My absolute favorite thing about this music is the shows. I have way too much energy which often times channels itself into manic outputs. I like going to shows and losing my mind. Coming out and having the whole show be a giant blur. Every band has a different message, which I love, I'm HUGE into lyrics. In 2014, my favorite bands are like this - Caught In A Crowd, Sweet Jesus, GIVE, The FLEX.

9. You are a well known kid in the scene, and you are traveling for shows all over the place in the northeast. Is it hard to keep relationships that are long distance and/or rarely getting to see these people? 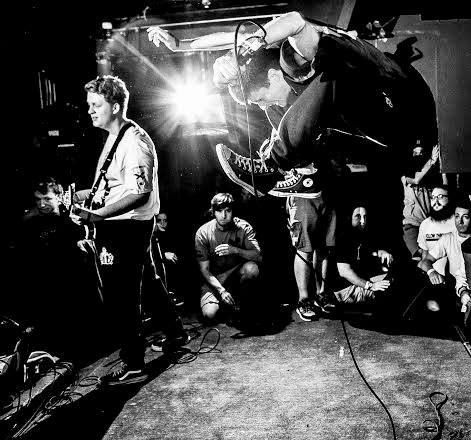 I don't really know, I don't think about most people that live long distance unless you've had a profound effect on me. I get caught in whats going around me. Which shouldn't be seen as an insult, most people I meet once or twice at a show and have a 2 minute conversation with do not cross my mind.


10. What do you do outside of music?
Work a few jobs and jump around in my room. I started writing a lot more. And I like to read comic books. Sometimes I will go on a quest to get lost in the woods and my objective is to get home safe.

11. Let's say divine intervention prevented you from any involvement in music, what would you be doing instead?
Had I no music, Jack Daut would be one fuckin blank canvas. Because auditory stimulation is the only thing I look forward to. I remember in high school I would be most excited for the 4 minute transition period between classes so I could play a song or two on my listener. I'd probably be on a street corner in Phoenix, AZ preaching about something abstract and indifferent to most people. I don't know. That's a scary thought.

12. Will you show anyone in your family BOR, what will they think/say?
Yeah my grandma really likes it. She wants to buy a t shirt but she doesn't like the screaming. She showed me jazz so she gets the crazy shows and incessant passion. My dad thinks it cool but lowkey probably makes fun of it to his friends at golf. My mom kinda hates it. My sister is indifferent.

13. What's your most starstruck core moment? (if any)
I saw about 20 kids in CIAC WAGED WAR 00 EDGE DAY jerseys going OFF to CIAC. The biggest starstruck moment though would HAVE to be when I realized that a hardcore show is a series of large and soft vibrations, they make their way into you and you can either ignore them or let them vibrate you. I realized when I can do exactly how I feel, I feel best. It's really something sincere.

14. What do you think a full grown adult Jack Daut is gonna be like?
I will be young until I die. I will be jumping off things and screaming when I am 40 years old. Maybe not in the same format but my passion for internal expression will be prevalent. I'll still be listening to Dag Nasty Demo, X Marks The Spot Comp, You're Only Young Once, Schism 1-4.

15. What's the worst thing you've ever done?
I said something extremely vulgar to kid that sat next to me in Spanish class sophomore year. I got a week of in-school suspension. That was the worst thing I did.

16. It seems like you are at every sick show up there, what is the threshold for you to decide to sit one out?
The threshold is very slim. I try to make every show, even if I only like one band. I travel to shows because I don't wanna ever look back and think I could've done it better.

17. If you could give one message from your heart to other guys in their early 20s about living their best life now what would you say?
DO WHATEVER YOU LOVE. HOLD ON TO IT. STRECH IT OUT. EXPLORE IT. DRAIN IT. DISSECT IT. VIEW IT FROM 13 DIFFERENT SIDES. Then make sure to do it exactly how you want, without outside influence. We will all die someday, and when that day comes we will be proud that we stayed true to ourselves.

Thanks Jack! Can't wait to see what is next for BOR!
Posted by RottenYoungEarth at 11:31 AM