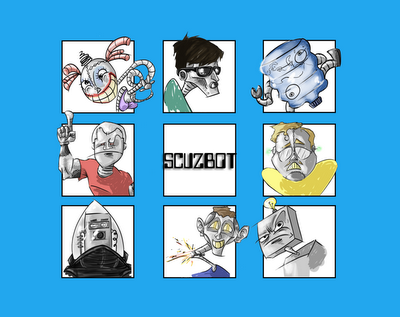 Scuzbot are a pop punk band from Pennsylvania and are very hardworking in the DIY scene there and spread across the scenes to Delaware and New Jersey for about 2 years! They released their EP Shapes and Trends about a year ago (Get that here)

The album starts out with the song "People Hate Fun" which honestly starts out the album perfect! It really sets the mood for the rest of the album. With happy upbeat sounding instruments accompanied by not so positive and happy lyrics this stuff is really growing on me! I'm usually not the type who is into pop punk like this. The first song really is sending me some New Found Glory vibes. Especially at the best part in this song where it slows down and the lyrics are "So go have a bad time with all your coffee drinking friends, I know your night was shitty. I hope that mine never ends" That part is just the defining point of this song to me.

I honestly wasn't expecting some of the lyrical work these dudes have to come from them just by hearing what the actual music sounds like. Honestly the lyrics sound like they are coming from an emo record like its Algernon Cadwallader or something. Besides there are a few more silly lyrics that come from these dudes but at the same time its kind of refreshing to not be super serious all the time. Some of my favorite lyrics on this thing come from Say It Don't Spray It, Washed Up, Perfect, and Giving Up On You. As well as those are my favorite songs!

The instrumentation on this thing is pretty straight forward but why not? Because these dudes pull it off so well! I'm honestly surprised these guys aren't bigger with the sound that they put out. They can switch from super poppy stuff into some heavier break parts that there is no way you can't move to! Like I said earlier this stuff really reminds me of New Found Glory as well as some Rehasher and Less than Jake on occasion. Which I love all of those bands like no other. Then there are songs on this that remind me of more of a emo song like Send In The Clowns, that song starts out with such a fucking awesome guitar part. It sounds like it would be coming from a twinkle band or a band like Sunny Day Real Estate! Speaking of this song, this is one of the slower sadder songs on the album, I'm glad they have songs to change up the sound of the album because the first 3 songs before this one are pretty fast! Thats one thing I keep saying about this band. They are refreshing. That soft slower song continue on the album for a few more songs then picks up again.

The album ends on a half acoustic half electric track called Giving Up On You, which just as perfect as they started the album they end it just as perfect! I can't even begin to talk about how much I relate to this song. Its just about being stuck in your house while all your friends and people you love are doing things and having fun without you, but you're trying to be positive and you're trying to find what you did wrong but you're having a hard time doing it. Well thats what I got from this song, I may be wrong!

Overall this album is fucking great! It honestly moved me because a lot of these songs I can relate to with the situation i'm going through currently. The instruments as stated, fantastic. Vocals, perfect. Lyrics, love them so much. This topped their EP and my expectations of them after hearing the EP. I'm glad these dudes submitted their music to me. I am looking forward to their future endeavors.